The Student Awareness of Fire Education (S.A.F.E.) Program is a state initiative to provide resources to local fire departments to conduct fire and life safety education programs in grades K-12. The mission is to enable students to recognize the dangers of fire and more specifically the fire hazards tobacco products pose.

There are 23 Key Fire Safety Behaviors that should be taught in age and developmentally appropriate ways, such as:

Since the S.A.F.E. Program was initially funded, there have been 259 documented  YOUNG HEROES - children who put into practice the fire and life safety lessons they learned in the classroom during a real life emergency to save themselves or others. Many families claim they are alive today because their youngsters "made" them install smoke alarms and practice a home escape plan, or reported an emergency, or persuaded a grandmother to 'stop, drop, and roll'. Some success stories are: 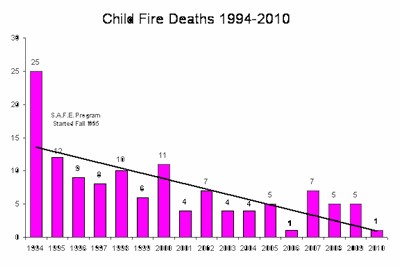